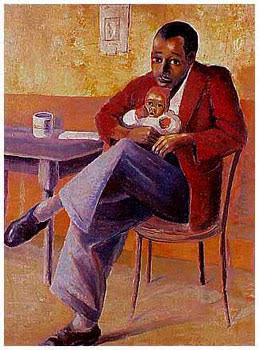 We’ve been tamed and perverted

when a Black Person gets murdered

instead of fighting for them – when they are alive. We’re all in collusion. Black men, in particular, like Christ or the Artist, are preferred dead. They’re easier to love and remember then. We prefer to mourn the dead rather than praise the living. While it is true most people on the planet — living or dead — don’t deserve an after-thought in the cosmos, there are still uniquely luminous individuals among us,

or perhaps they startle when entering the café

or mesmerize when crossing the street,

sometimes it’s their words or voice we remember

or the scent of their clothes.

But it is safe to say that these people are never in positions of power. When they are — their murders sting, but they don’t surprise. Instead, we pretend we’re shocked when a harmless child or a struggling beaten down member of the Proletariat get killed. But all along we were just riding beside that Police Car, dispatching ourselves to the Fascists and believing in the sacrifice of our own

rather than the annihilation of a system

that seeks to destroy the Colored Man

with text, on screen, over radio, and in flesh.

[The splendid painting “The Proud Father” above is by the South African painter, Gerard Sekoto, 1947. ]

"I've been addicted to the flight, the albatross reason and the eternal search for something I couldn't explain or give or create or destroy..." Guerrilla filmmaker, performer, & writer Dennis Leroy Kangalee is a radical media ecologist who writes critical essays about protest art, activism, Black cinema, and culture. He is best known for his 2002 controversial film "As an Act of Protest". He is the author of "Lying Meat" (poems), the 2011 performance-piece "Gentrified Minds" and several screenplays. A Juilliard alumnus, he is the creator of the "Visual Liberation" film pedagogy that relates to 'protest art', he is available for lectures, workshops, freelance writing assignments, and private acting coaching lessons for actors. View all posts by Dennis-Leroy Kangalee