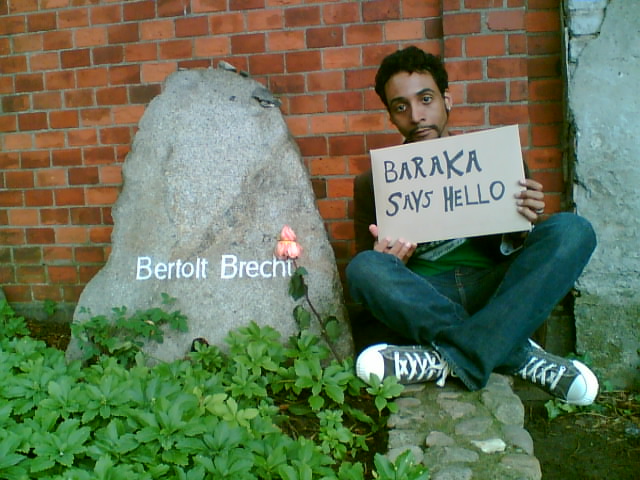 It was the type of beauty that makes an artist jealous or an atheist create a religion.

The woman’s face seemed to say “Handle With Care”. Her features were etched with a loving poise as if the brush across her face said to its own bristles: “Check this out.” Her lips had the sculpted and untouched look of a marble statue or a grandmother’s china set. Majestic, but almost too sterile. But so real that you knew if you touched it, you could break it. The delicacy of her face hosted a pair of bright cavernous eyes. They seemed deep and endless, a Xanadu unto herself. And just as lonely, perhaps. Her hair waved and nestled around her head. And her collarbone, too, seemed unloved and therefore all the more inviting. Her breasts hung and bobbed naturally, barely hidden beneath a thin wisp of loose cotton. The Maestro’s mouth twisted dumbly and his eyes ached. He felt bad about every negative comment he had ever made about women. Or life.

He watched her cross the street and saw the poetry in her gait, her bent head, tired arms. What he had always read about in dance books is what this woman was. The purity of her movement–was a great deal to take because it championed the “Beauty of a Better Tomorrow” philosophy in today. Her demeanor was confident, but mortal. And her curved marble lips were not pursed for her victim; they were curled up for grace. A shift of one minor muscle and it would have read as a smirk. All that beauty, like the blanket of stars at night, swimming through this sea of contempt, unpleasantness, and bitter digitized Eleanor Rigby’s of the world.
Seen, but not valued.
Hated because it lived and breathed.
Scorned because she was beautiful, but not wealthy.
Single, but not lonely.
Happy, but not ignorant.
And it was in the way she bent down to adjust her shoes that the trembles started and pain swelled…

He had to do something; he was still dizzy from his episode minutes earlier. He sucked on his dwindling saliva and hummed. Her tiny ballet shot adrenaline-razors through his veins.

Her shoes: tattered, worn, and dejected. But treated like the hands of Moses. She was so casual that it frightened him. The cardboard around her feet were folded and molded like moccasins. The shoestrings were made of wire like un-done hangers. If it hadn’t been for sanguine stretching for August, the stitches, like crimson thorns stuck in benign berry–he would have never noticed…And that is what continued to pain him.
Her refusal to crumble in between the pitied streets of a broken cabaret city and a metropolis frozen in spirit, caught between two different chords–minors and majors clashing and bending like fists in a boxing ring twirling with the sprays of sweat drooling on the grooves and in between the rich peoples’ collars, made him sad. And he looked and he could feel the threads of yesterday’s train pulling and hooting at some lonely distant region of his brain. Her old fashioned elegance reminded him of those black and white movies from the 1940’s and instantly his parents, who always appeared larger in his memory, came to him with comforting compassion and an immense yard of broken TV’s, each gripping its thwarted dream…

He revolted when he imagined the pain of her footsteps,–but like everyone else with a battered soul, shot nerves, and no hope–all he could do was stare and stand motionlessly. At least he gave her full attention. She removed all her clothing and ejected a rolled up ball of tissue in between her legs to help stop Aunt Rosa’s mighty flow. Sadder than an unemployed man’s footprints in the snow on New Year’s Eve.
Sadder than a subway ride on a Sunday afternoon.
Sadder than people who believe that hunger isn’t murder.
Sadder than a last minute pack or an eviction notice in the strange cool air of the summer solstice.
Sadder than a cemetery with gum on its fence.
And sadder than the boys who know who their fathers are–but have no desire to be like them.

Listen to the excerpt recorded here as a ‘Monocord.’

[photo of the author, Berlin, Germany at Bertolt Brecht’s grave, 2006.]

"I've been addicted to the flight, the albatross reason and the eternal search for something I couldn't explain or give or create or destroy..." Guerrilla filmmaker, performer, & writer Dennis Leroy Kangalee is a radical media ecologist who writes critical essays about protest art, activism, Black cinema, and culture. He is best known for his 2002 controversial film "As an Act of Protest". He is the author of "Lying Meat" (poems), the 2011 performance-piece "Gentrified Minds" and several screenplays. A Juilliard alumnus, he is the creator of the "Visual Liberation" film pedagogy that relates to 'protest art', he is available for lectures, workshops, freelance writing assignments, and private acting coaching lessons for actors. View all posts by Dennis-Leroy Kangalee